Feeling lost in your empty nest? Learn More
You are here: Home / Faith / Midlife and the Mission of Hanging On 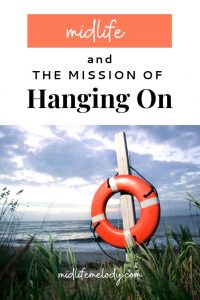 Life is messy sometimes. No doubt about it.

As we jump into midlife (or maybe slide in on our bellies), we unpack the baggage of developing circumstances. Complications just seem to erupt as our families age, and often it falls on our shoulders to solve them. We reach the midlife years, our parents reach their elder years, our kids become adults, and the worries just seem to get larger. In response, we as women seem to carry the weight of our families, and all their ‘issues’.

My husband and I stumbled into 2019 recovering from a long awaited house sale. For many months we shouldered two house payments, reshuffling priorities along the way. The market was very slow in that area, and we had to trust God for an end, and relief. We also have family with chronic health issues, and we have very old cars, both of which require money. Plans often got changed and rearranged with all of these. Have you noticed that God tends to wash away our safety nets so that He’s all we have to cling to?

At the beginning of the year, I thought long about what I wanted my 2019 to look like. I thought about resolutions (ugh) and instead chose my mission. I’ve learned to plan my life in pencil, and I tend to laugh because as a mom, a wife, a daughter, I rarely get to pick what my life will look like. Things happen.

Get my free printable Mission 2019: Love God, Love People at the bottom of this post.

I need to remind myself often that life is about the journey right? Not our messed up plans. Kids need us. Parents get sick. Jobs are lost. Moves are necessary. The government shuts down. Houses don’t sell quickly.

And we step up. We adjust. Most of all, we hang on.

On January 1, I began reading the Bible all the way through again. I don’t have a set plan, I’m just reading several chapters a day. I have to tell you, every time I read Genesis I discover a new nugget of Truth. I love the story of Abraham and company and all of their issues. Their humanness and courage always speak to me in how they bravely followed God. God called, they obeyed, often screwing up along the way. I can relate.

Just a few chapters earlier, the story of Noah is no different. You’ll find it in Genesis 6-9. It begins with a world that was endlessly corrupt. God was fed up, so He decided that the only way forward was to destroy it and begin again. But, there was one upstanding man, and his family, who God decided to save, Noah.

God spoke directly to Noah, telling him what was about to happen. He even gave him extensive plans to build a huge ark to survive a flood. Can you picture Noah’s bewildered face in this conversation?

Noah had probably never seen rain before as the Bible doesn’t mention rain before the flood, so, possibly, the whole idea was bizarre to him. Even so, he was obedient, though the whole project took years to complete, all the while enduring the scorn of his neighbors.

Once the ark was finished (and sitting on dry ground), the animals miraculously showed up and boarded. Can you imagine watching that whole scene? And then, God closed the door.

And the raindrops began.

The epic rains sprang forth from the heavens for 40 days and 40 nights. Every living thing perished. The only ones saved were Noah, his family, and animals on the ark. If you’ve ever endured a flood, you’ve seen the unbounded power of water.

Don’t you wonder what they expected when everything began? The catastrophic water must have been mind blowing and just a ‘little’ frightening. The Bible tells us that the water was 24 feet deep on the mountain tops. Wow.

So put yourself in Noah’s shoes, or sandals and imagine being on this ark for the 40 days and nights and watching the sheer power of God out the window. I would have been terrified. Would this structure hold together? I would have listened to every creak of that wooden structure with gritted teeth, waiting for it to come apart.

They also had work to do. I wonder if God wanted to keep their minds occupied with all the animals. They kept busy with the endless chores in caring for a ship full of animals.

Their mission was to keep everyone alive. The shock and awe of such an event kept them focused on this mission and perhaps kept their fear at bay.

Then the rain stopped.

And they were still floating.

They floated on the ark 150 days. That is five months! I don’t know about you but years ago we owned a horse that required daily stall mucking. Just one horse. Can I just say that this job is messy, and smelly and yucky. I literally cannot fathom being confined on a huge animal ship without going a little crazy.

Get my free printable Mission 2019: Love God, Love People at the bottom of this post.

How did their thinking change once the rain stopped? I imagine it got very scary, with Noah and his family wondering about their future. Day after day went by with no obvious change in their circumstances. Was this ‘it’ for them? Would they die here, when their food eventually ran out?

I wonder if they began to get a little angry. Did they wonder if God had forgotten them? Did they resent the fact that they had obeyed God , only to have Him leave them in the middle of the ocean to die? Were they patient people? How did they question their own faith? I just can’t believe that they didn’t question everything at some point.

They had to wonder, “Where is God?”

Five months is a long time, almost half a year.

Our own middle age problems today often take time for God’s hand to be seen. Sometimes we are asked to build things. We build our lives. We make our homes. And then sometimes we have to watch the world around us come crashing down. There’s fear, there’s anger. And there’s a time when we must let go and release it all to God.

It’s hard to think that God might leave us on a stinky ark with a grumbly family (that drives us crazy) for months, or years, on end. When we are in the ark and drifting without sight of land, without the light at the end, it’s hard to see the big picture. All we see is our world being destroyed.

BUT, my friend, all God sees is us being saved.

Sweet sister, maybe your mission this year is simply to hang on. It was Noah’s mission.

It’s ok to be feeling lost and adrift with no land in sight. Just because you may not see the end just yet doesn’t mean God is not there. He knows your circumstances, every one of them. Every detail. He is the GOD of detail. After all, he instructed Noah exactly how to build the ark. He knew exactly what they would need.

Just like Noah, God knows exactly what you need. He’s heard every prayer, and seen every tear.

He DOES answer prayer.

Your dry ground is coming. Just hang on.

If you enjoyed this post, I would be so grateful if you would please pass it on and share it with a friend who may need it. Thank you, my friend!

PS. Don’t forget to sign up below for VIP membership to my Resource Library which includes the printable Mission2019: Love God, Love People! 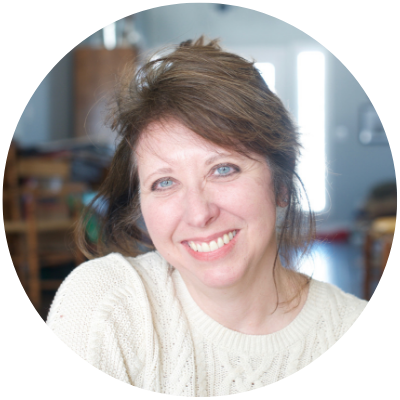